Grab the Bull by the Horns

In the controversial Urus SUV, Lamborghini has created a supercar you can use every day, as James Fossdyke discovered 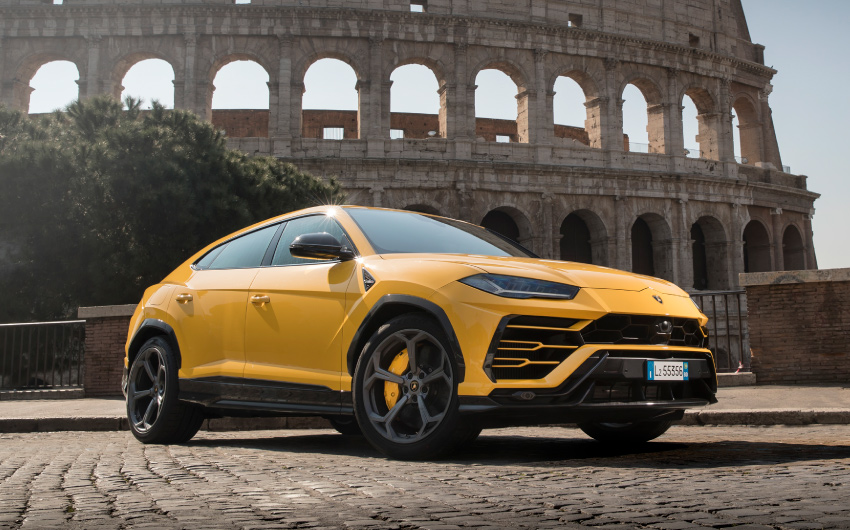 Monty Python helpfully laid out everything the Romans did for us, but what about the Italians? While their predecessors created all the stuff that goes without saying, the modern Italians have created great food, stunning wine and they do a good line in speed boats, but their cars take the biscotti. The Ferrari name is legendary, the Fiat 500 is one of the most desirable things on the market today, and the Alfa Romeo Giulia is jaw-droppingly beautiful. Then there’s all the old stuff, from the sexy Alfa Spider to the incredible Ferrari 250 and from the glorious Maserati 3200 to the unhinged Pagani Zonda, it’s all spectacular.

But one Italian car manufacturer takes spectacular to the next level. Lamborghini started out making tractors, and it did so with enough success to pay for Ferruccio Lamborghini, the company’s founder, to own a handful of Ferraris. But Ferruccio wasn’t especially impressed with his Prancing Horses, and he made his grievances known to the legendary Enzo Ferrari, who wasn’t especially impressed with Ferruccio’s opinions. So, in the spirit of great Italian vendettas, Lamborghini made the Miura – one of the most beautiful and most dramatic supercars of all time.

Fast-forward six decades and Mr. Lamborghini is no longer with us, but his name has been immortalised in a line of fantastic supercars. From the Countach to the Murcielago and from the Diablo to the Huracan Performante, it’s a family tree that’s brimming with outrageous designs and even more outrageous performance. But like so many performance car makers, Lamborghini has had to move with the times. In response to the success of the Range Rover, Porsche Cayenne and Bentley Bentayga, Lamborghini has gone all family-friendly, building the car you see before you. Yep, this is Lamborghini’s idea of an SUV.

Technically speaking, this isn’t Lamborghini’s first SUV rodeo. Back in the 1980s, the LM002 was created for military purposes, but no army wanted it. Then Lamborghini tried hawking it as a road-going 4x4, but no customers wanted it. If we’re being kind, the LM002 was ahead of its time, but if we aren’t, it was a dog. 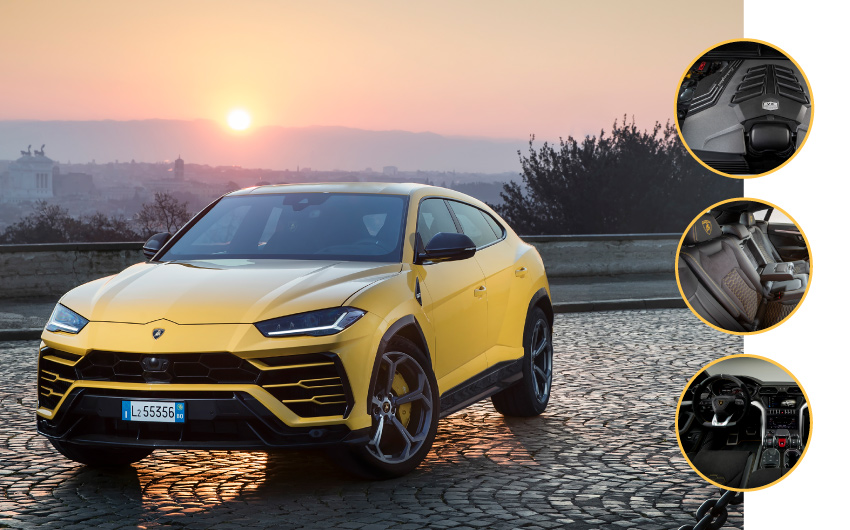 This modern Lamborghini SUV, however, ought to be somewhat more successful. Under the skin, it’s based on parent company Audi’s Q8, which means all the practical boxes come ready-ticked. There’s space for four adults to sit in comfort, there’s a big boot for all their luggage, and in shock news for those familiar with old Italian cars, everything works. It will even go off-road, although I suspect the number of customers who will take this car over anything more taxing than a muddy field can be counted on the fingers of one hand. Still, it’s good to know the Urus won’t grind to a halt when the snow comes down.

But just because the Urus has a sensible side, don’t go thinking they’ve forgotten to make it a proper Lamborghini. Yes, it sits high above the road and it has an extra set of doors, but it still has that low, pointy snout, big air intakes and the curved silhouette that underpins the design of every Lamborghini since the Countach. The Y-shaped tail light signature remains, too, as does the upright rear end and the massive exhaust pipes.

Inside, there’s plenty of Audi influence – the touchscreens in the centre of the dashboard are taken straight from the Q8 – but the details are pure Lamborghini. There’s the fussy, cluttered digital instrument cluster, for example, and the complex gear selector arrangement between the seats. Then there are the two drive mode selectors either side of it, festooned with words that didn’t come up in your GCSE Italian paper. It even has a switch marked ‘Ego’ that allows you to pick the suspension, engine and steering settings.

But the best bit is the engine starter button. Sitting in the middle of the centre console, the button itself is hidden under a big red safety cage, designed to prevent the button being pressed accidentally. At least that’s what such switches do in their natural habitat: the cockpit of a fighter jet. It’s a small, childish touch, but it just makes the Urus feel more special than something like an Aston Martin DBX or a Range Rover Sport SVR.

Press that button and you will wake the 4.0-litre V8 engine that lives under the bonnet. It isn’t as big or as cylinder-rich as the massive 10- and 12-cylinder engines found in the Huracan and Aventador supercars, but it’s still mighty. 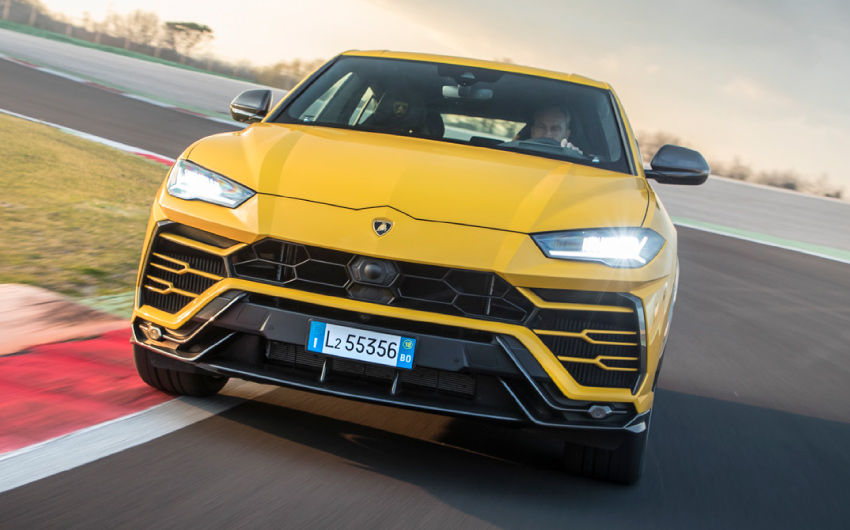 With the help of two turbochargers, it produces 641bhp and a fabulous rumble. Hit the accelerator and it snarls angrily, like a wounded animal.

Thanks to that engine, the eight-speed automatic gearbox and the four-wheel-drive system, the Urus gets from a standstill to 62mph in just 3.6 seconds, while the top speed is an impressive 190mph. It’s a shame it can’t break the 200mph barrier, but that’s a whole new level of nit-picking. For most Urus drivers, 190mph will be more than sufficient.

Particularly when the Urus drives this well. Decipher the Italian, ramp up the settings to maximum attack and the Lamborghini will give some pretty serious sports cars a run for their money. For something this big, this heavy and this tall, the way it corners is sublime, with agility and responsiveness that puts hot hatchbacks to shame. And the acceleration is epic. Pull out to overtake slow-moving traffic and you’re through before you even get a chance to gesticulate manically at the offending driver. Then, of course, there’s the noise…

Normally, a car that accelerates, brakes and handles this well would come with a pretty serious trade-off in terms of comfort, but the Urus rides admirably. It is definitely on the firm side and picking the softest suspension setting makes the car feel a bit wobbly and unsettled over broken surfaces, but it’s brilliant on the motorway. Long journeys are no problem at all. It’s only around town and on country roads that the Urus judders over bumps, but it’s far from intolerable, even in the slightly firmer mid-level suspension setting.

And therein lies the genius of the Urus. It manages to merge all the grown-up stuff – boot space, satellite navigation, comfy seats – with proper supercar performance. It isn’t the only car to do that, as Aston Martin, Bentley and Porsche will gladly point out, but it does it without sacrificing too much of the drama and aggression that makes a Lamborghini special. 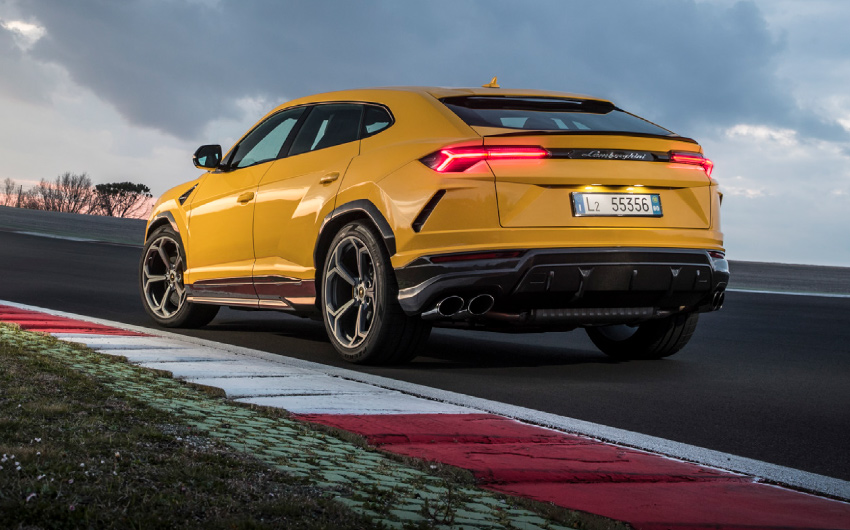